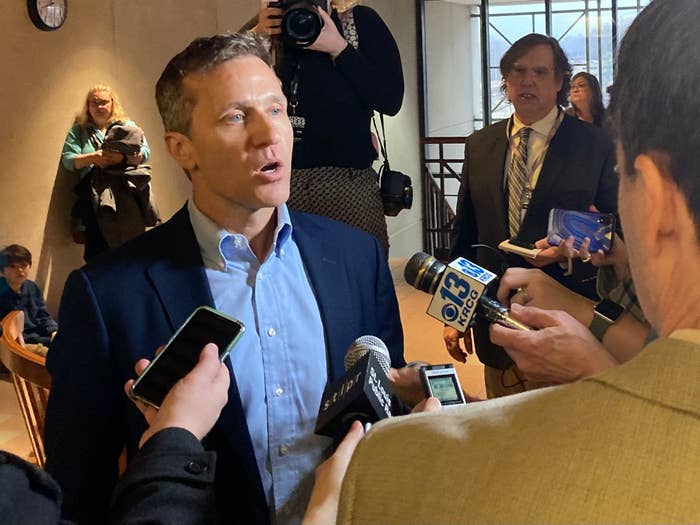 A Republican US Senate candidate’s campaign video calling on supporters to hunt members of the GOP considered disloyal by its right wing was removed from Facebook and Instagram on Monday for inciting violence.

In the video, Eric Greitens called on supporters to go “RINO hunting,” referring to “Republicans in name only,” a term regularly used by former president Donald Trump to describe his critics within the party.

“I’m Eric Greitens, Navy SEAL, and today we’re going RINO hunting,” says Greitens, who resigned as Missouri governor in 2018 after a series of scandals. He then pumps his shotgun. 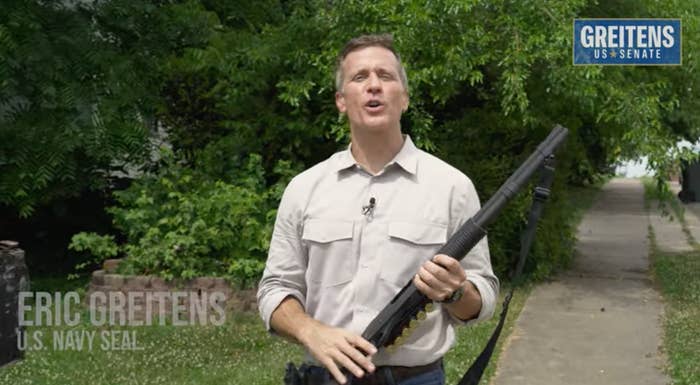 In the video, which was posted to Twitter, YouTube, Facebook, and Instagram, a group of armed men dressed as Navy SEALs then break down the door of a home and enter it with their guns drawn as dramatic music plays.

Greitens follows them inside and says, “Join the MAGA crew, get a RINO hunting permit, there’s no bagging limit, no tagging limit, and it doesn’t expire until we save our country.”

A spokesperson for Meta told BuzzFeed News the video was removed from Facebook and Instagram “for violating our policies prohibiting violence and incitement.” The video, which was posted around 9:30 a.m. ET, was still accessible on YouTube and Twitter on Monday afternoon.

Ivy Choi, a spokesperson for YouTube, told BuzzFeed News that the video does not violate the company’s Community Guidelines, which state that “content that encourages dangerous or illegal activities that risk serious physical harm or death” is not allowed.

On Twitter, the video was flagged as having violated rules about “abusive behavior,” but it remained viewable because the social media platform “determined that it may be in the public’s interest for the Tweet to remain accessible.” A spokesperson told BuzzFeed News that users will be able to quote-tweet the video, but they would not be able to like, reply, or retweet it.

The video was quickly criticized by people on social media, including members of Congress and veterans, for advocating for violence against elected officials. Doug Heye, a former spokesperson for the Republican National Committee, described the video as “sickening,” tweeting that he had “never seen an ad inciting murder before.”

It comes just a day after US Rep. Adam Kinzinger, a Republican who is serving on the House committee investigating the Jan. 6 insurrection, shared a letter he received that made threats to kill him, his wife, and their young child. Over the weekend, Republican Rep. Dan Crenshaw, a former Navy SEAL, was confronted by right-wing protesters and called a “globalist RINO.”

“There’s violence in the future, I’m going to tell you,” Kinzinger said Sunday on ABC’s This Week. “Until we get a grip on telling people the truth, we can’t expect any differently.”

Greitens resigned as governor in 2018 amid allegations that he took a nude picture of his former hairdresser, with whom he was having an affair, and threatened to blackmail her with it. His ex-wife recently accused him of domestic violence, saying in an affidavit that the alleged behavior extended to their children. Greitens, who has been leading the polls for Missouri’s Republican primary election in August, has denied the allegations.